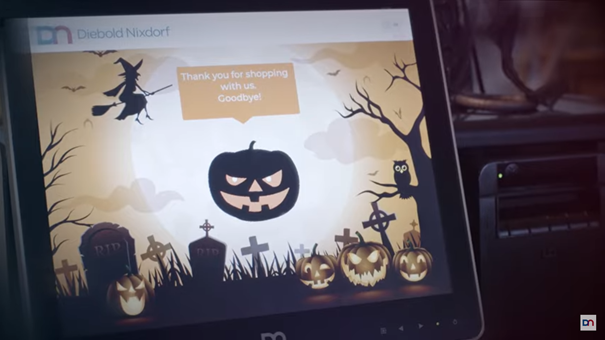 Stationary retailers decorate their shop depending on the season, onliners program their website to suit the season and the festival – and Diebold Nixdorf has now introduced the self-service checkout that can be decorated: It allows “much more entertainment and infotainment”, and it is easy to set it yourself, so the promise. It remains to be seen whether customers really want to see memories of Valentine’s Day and Mother’s Day at checkout, but the idea of ​​floating spiders and witches across the checkout screen on Halloween, hat was.

///// NATIONAL TRADE
15 percent of the goods shipped come as returns again
And something else to scare you: 15 percent of the goods ordered online in Germany are returned to their dealers. That is what the digital association Bitkom found out. As he reports, take b44 percent of online retailers “rate returns to such an extent that they are a burden on the store”. 505 were interviewed Trading companies in Germany – including only 203 retailers who sell partly or exclusively on the Internet.

Eismann: Creditors become shareholders
The company was already a delivery service when there was no Internet: The frozen food specialist Eismann, founded in 1974, profited so much from the delivery boom during the pandemic that two creditors converted their claims into (further) shares. As Lebensmittelzeitung.de writes, these are the investor Robus, who remains the majority shareholder, and the investment bank JP Morgan. Eismann expects an increase of seven percent for 2021, and a new app for direct communication with (independent) drivers is planned for the future.

Amazon adjusts returns – retailers should adjust legal texts
As every year, Amazon has more customer-friendly return conditions for the Christmas business: “Most orders purchased between November 1, 2021 and December 31, 2021 (both inclusive), [müssen] can be returned by January 31, 2022 “, it says on “Seller Central Europe”. Amazon retailers should incorporate this into their legal texts, advises Onlinhaendler-News.de, otherwise warnings threatened.

Ankorstore wants to bring Black Friday to independent retailers
The French B-to-B marketplace Ankorstore, also on the move in Germany, promises 1) brands the short line to the trade, 2) retailers the easy purchase of brands – and 3) both now the conquest of Black Friday: until the 2nd November Ankorstore reduces all prices by ten percent. Brands could add more discounts, the company said. The aim of the whole thing: if you buy at a discount now, you can sell at a discount on Black Friday. “This action should finally create equal opportunities” (towards the online giants), so the company. It includes the combative hashtag: #Takeblackfriday.

Gorillas cooperates with Tesco
Gorillas is setting up micro-warehouses for its drivers at five locations of the major British grocer Tesco. Conversely, the Berlin-based delivery service includes Tesco own brands in its program, see above Lebensmittelzeitung.de.

A million Britons may have received “brushing” packages
“Brushing” describes the practice of some online retailers of randomly sending cheap products to private addresses without ordering in order to refine their sales statistics or to be given the opportunity to rate themselves well. A survey by UK consumer magazine “Which?” found that four percent of 1,839 respondents received such unsolicited but paid deliveries. Throughout the UK it could be 1.1 million Brits, “Which?” high. The packages contained magnetic artificial eyelashes, children’s toys, smartphone covers, medical gloves and other items. Amazon itself could be the main victim because such practices falsify its own ranking system.

E-commerce rights granted for the Olympic Games
Anyone who has hoped to get involved in the online sale of merchandising items from the Olympic Games: It’s too late for that. The deal up to the 2028 Summer Games in Los Angeles went to Fanatics from Florida, USA, so CNBC.com. The 2022 Winter Games in Beijing are an exception, which was regulated with Alibaba.

USA: Amazon finally stops delivery to the trunk
In 2018, Amazon began offering Prime customers in the USA delivery in the trunk of cars from Ford, Volvo and Hyundai, among others. That was interrupted in March and now finally stopped, reports CNBC.com. Reasons are not given, but there should be more emphasis on delivery in garages.

Zeitfracht with a central click & collect app for booksellers
In the summer of 2019, the logistics group Zeitfracht took over the book wholesaler KNV, which is why this message is blowing from the logistics corner onto the screen: Zeitfracht has launched the end customer app “Book Catalog” for the Frankfurt Book Fair. It was programmed by Piazza Blu and makes it possible to order books online and have them delivered free of charge to one of 1,300 stationary bookstores. Payment is made upon collection, as is the case with classic book orders. The purchase via Paypal via the app and home delivery are also possible, so the press release. The idea is not entirely new: It is based on the principle of the Zeitfracht website Buchkatalog.de into a mobile app.
Zalando enables the return of second-hand products via the “Zircle app”
Mode-Onliner Zalando points out two innovations in his second-hand channel “Zircle-App” (which used to be called “Wardrobe”): Anyone who has bought an item with the label “Rezircle” from another customer via the marketplace can send it back – not to the customer, but to Zircle. Zalando will then reimburse the purchase price in full, albeit in the form of a voucher and not in cash. Second, Zalando covers the shipping costs (via DHL) for private sales via the marketplace. The whole thing is currently available for women’s clothing and, according to the company, is to be expanded “shortly” to include men’s clothing.

Alpacas: Delivery service for unpackaged food starts in Berlin
Uuuuuund another delivery service, this time for unpackaged food: The start-up Alpakas wants to bring food filled in reusable containers to the doors. That should “feel like at the weekly market: With local products, organic quality and reusable packaging. And without plastic waste”, Capital.de writes about the concept. The founders are convinced that this works better in delivery services than in shops, since alpaca takes over the transport and cleaning of the containers. 500 products are in the range – with gaps, because there are hardly any plastic-free solutions for fresh meat, fresh fish, cosmetics and hygiene articles. According to Capital.de, the donors behind Alpakas include Gorillas investor Christophe Maire and Hellofresh managers Markus Windisch and Nils Hermann. There is no need to mention where alpacas starts. (In Berlin.)