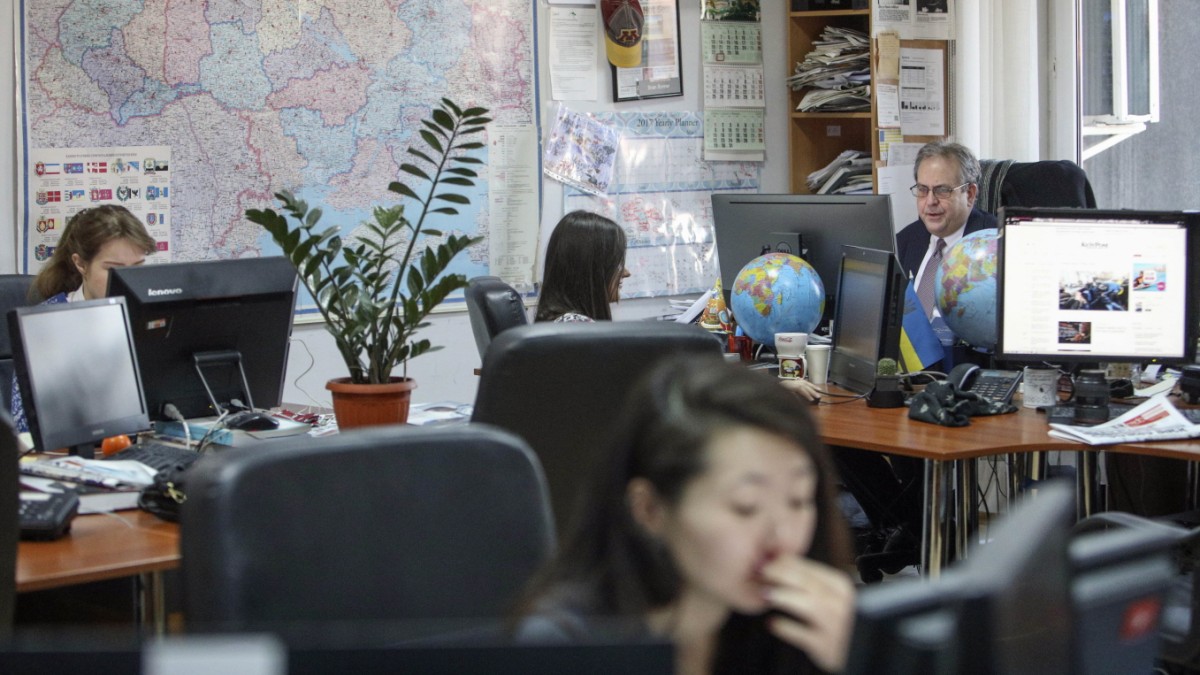 Unambiguous words were uttered than that Kyiv Post got a new owner in spring 2018. Adnan Kivan, a real estate entrepreneur of Syrian origin and multimillionaire from the Ukrainian port city of Odessa, promised not to interfere in the coverage of the Kiev newspaper. “There is no democracy without journalistic independence,” said the new owner on March 30, 2018. On November 8th, however, the policy of non-interference was over: owner Kivan unceremoniously fired the entire editorial team, apparently because they insisted too much on their independence.

the Kyiv Post is a weekly newspaper with just 50 employees and an annual budget of over one million euros; outside of the Ukrainian capital, it has no offices in Ukraine or abroad. But its influence has grown steadily in the 26 years since it was founded: the newspaper, which appears every Friday, and its daily updated website are the most important sources of information not only for diplomats, business people and other foreigners in Kiev and Ukraine, but also for everyone who is in Europe or the USA interested in what is happening in Ukraine.

It owes its almost information monopoly to the Kyiv Post both the fact that she published in English under her respected founding editor-in-chief, the American Brian Bonner, and her standards, which are based on Anglo-Saxon journalism. Unique in Ukraine, in which the media – as in Russia and other countries in the region – either serve as a state propaganda station, belong to oligarchs and serve their interests, or work with such a small budget that articles bought with content are common.

the Kyiv Post but reported under five Ukrainian presidents, in two revolutions and an ongoing war with Russia not only independently on political maneuvers and manipulations, but also on the mischief of the oligarchs, on corruption and President Volodimir Zelensky – and with the specially created section “Reform Watch” about missing or even sabotaged reforms, for example in the key area of ​​justice.

Most recently, the Kyiv Post Prosecutor General Irina Wenediktova several articles: The lawyer apparently owed her job mainly to the fact that she helped Zelensky in the election campaign and at the beginning of 2020 was ready to replace a prosecutor general who was too independent for the president. Since then, Wenediktowa has been particularly noticeable for putting explosive investigations on hold or not even taking them up at all.

Kyiv-Post-Owner Kivan also owns the television station Kanal 7, which is not noticeable for its independence and great journalistic ambitions. the Kyiv Post on the other hand, it brings prestige to its owner, but he also needs deep pockets. Brian Bonner, who has headed the newspaper since 1995, said the Columbia Journalism Review (CJR), she has posted losses since 2009. Owner Kivan put seven million dollars into the newspaper and interfered with the editorial team the least of three owners he experienced as editor-in-chief.

But independent journalism causes problems in Ukraine. According to editor-in-chief Bonner, Tycoon Kivan did not foresee “the trouble that a truly independent newspaper will bring about”. In addition, this anger has apparently become a danger to Kivan’s other businesses. According to the journalists who have now been fired, Kivan “has repeatedly complained of pressure from the authorities as a result of the reporting of the Kyiv PostAccording to military specialist Ilia Ponomarenko, Kivan is said to have been particularly “unhappy” after the critical articles about Prosecutor General Wenediktova. Adnan Kivan has so far left a catalog of SZ questions unanswered.

On October 14th, the editorial team fell from the clouds: Olena Rotari from Kivan’s TV station Kanal 7 announced on Facebook that she was preparing a Ukrainian edition of Kyiv Post – and hire a complete editorial team for it. The existing editorial team with editor-in-chief Bonner knew nothing about it – and feared that Kivan would use the good name it had built to “create a replica publication in Ukrainian and Russian that would publish articles that are supposed to serve the interests of the owner”.

When the previous editorial team insisted on obtaining sovereignty over the new planned versions, they fired Kivan on Monday morning and blocked their access to the editorial server. With a tight one Message on the Kyiv-Post-Website Kivan said the newspaper was “closed for a short time”, hoping to “reopen it bigger and better one day”. At the 11th of November explained Kivan, there is a new general director who will appoint a new editor-in-chief under whom any of the previous journalists can continue to work.

The old editorial team, however, stated that it would only be under a new owner Kyiv Post return – or take over the newspaper yourself, which Kivan bought in 2018 for an estimated $ 3.5 million. According to journalists, however, Kivan refused to sell. The journalists “do not believe that it will continue to be an independent one Kyiv Post will give “- and announced on Thursday, they would try to build a “new publication”.