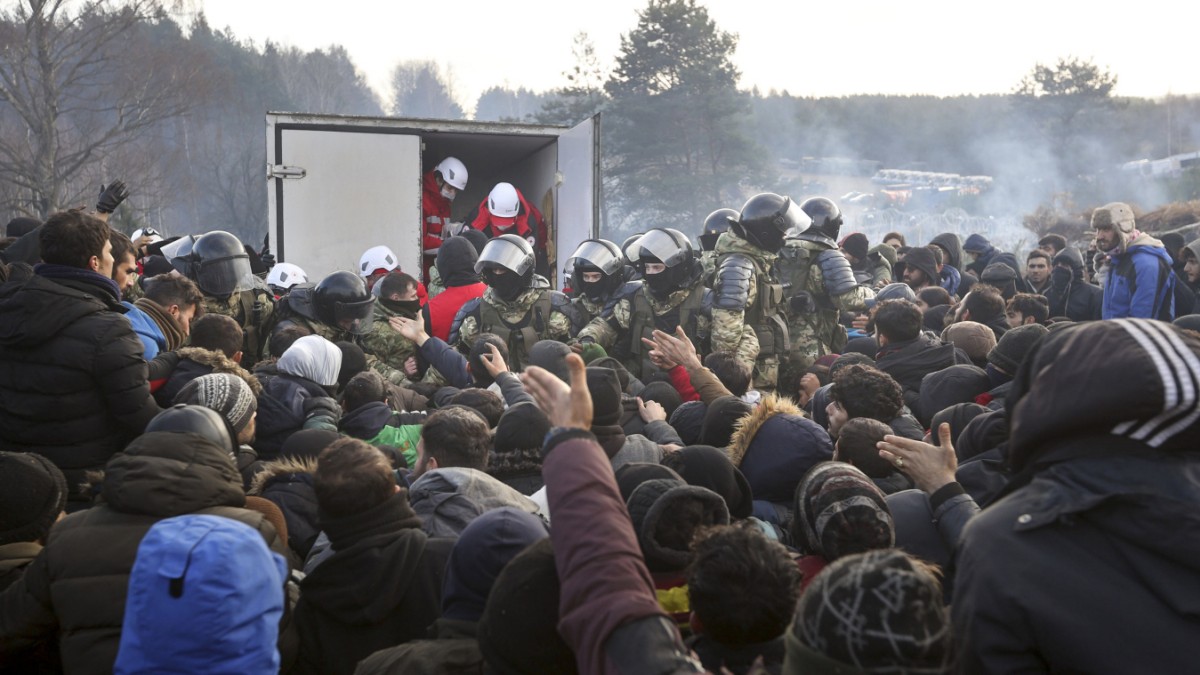 Belarus: The state media are using the refugee crisis for propaganda

The state is hardly recognizable, willingness to help everywhere. Belarusian men in camouflage uniforms pour tea into paper cups from vats and hand them to refugees, water bottles are distributed, smiling children are given large bags. An entire floor of a logistics center has just been exposed to make room for refugees from the Middle East; “Thank you Belarus”, the state news agency Belta quotes one of them, “but we hope to make it to Germany.” The Belarusian state, which has been cracking down on critics in its own population with merciless harshness for more than a year, and even if they are only wearing shirts or trousers in red and white opposition colors, is currently presenting itself as a carer and savior.

The drama on the Polish-Belarusian border is confusing, but the pictures and reports in the Belarusian state media are clear: Poland and the European Union are doing extremely badly and are to blame for the crisis. Polish water cannons hit defenseless people in these pictures, refugees face a helmeted bar of Polish security forces who block their way into the EU. And always photos of children. “The democratic West simply turns a blind eye to the crimes against humanity,” says the website of the state broadcaster Belarus 1. “The Polish soldiers are cold, calculating and soulless,” Belta quotes a member of the Council of the Republic, Felix Jaschkow. And the fact that Chancellor Angela Merkel has telephoned the ruler Alexander Lukashenko is seen by the Minsk state media as a “sign of common sense” that is now showing up in the EU. As always in conflicts, it is also about interpretative sovereignty, about the power of images. Belarus has a locational advantage in this case. It is closer to the refugees on the Belarusian side. And there are hardly any independent media left in Belarus.

For other pictures, children would have taken off their shoes on instruction to reinforce the impression that they were in need of help

“What we see here is part of a hybrid war,” says Alina Koushyk of the SZ on the phone. “Every day Poland is portrayed as a bad country on Belarusian state television, pictures of children with sad eyes are shown.” Alina Koushyk is a Belarusian television journalist who works for the exile broadcaster Belsat in Warsaw. She tells of a report on Belarusian state television that shows a boy about ten to twelve years old crying and screaming that he wants to go to Poland. On a video on the messenger service Telegram, however, it was possible to see how his parents approached the child with cigarette smoke in order to intensify the crying. For other pictures, children would have taken off their shoes on instruction to increase the impression of the need for help. “The Belarusian side is using this for their propaganda,” says the journalist, “and Poland has lost this war. Warsaw has now understood that.”

Belsat no longer employs its own reporters in Belarus. “That is too dangerous,” says Koushyk. The regime has classified the station as “extremist”, which is why Belsat now frequently uses YouTube and Telegram as social media sources. But Koushyk also criticizes the attitude of the Polish leadership. Because of the declared state of emergency, the images of the border area that Belsat uses are mainly from the Polish border guards and the Ministry of Defense. Only now should the media be allowed access.

Whether the state media reports get caught on the Belarusian side after a year of open brutal settlement with a large part of the own population? “The amount of propaganda is enormous,” says Alina Koushyk, “but most of them don’t believe in it.”