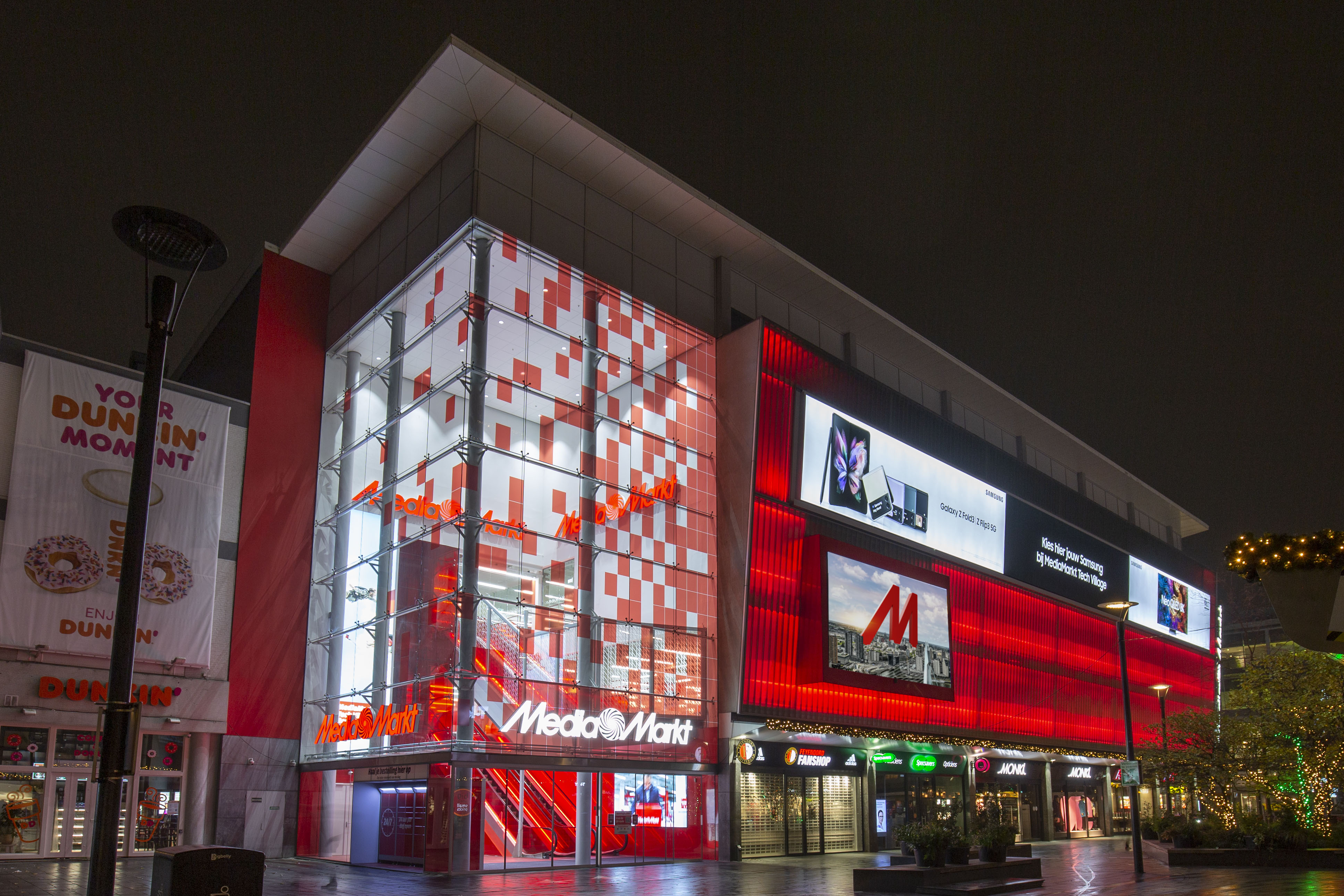 At first glance, what Media Markt Saturn is organizing in Rotterdam has nothing to do with e-commerce: the electronics retailer has one there 5,000 square meter “lighthouse” opens and promises „the latest electronics highlights at your fingertips “. And touching it does the trick: the shop is a sign of how stationary people differentiate themselves from online retailing through wow effects (here: 31 shops in the shop, barista bar) – in the The press release occurs five times “experience” and three times “discover”. And there is also a 24-hour pick-up station for online orders. Interestingly, the Dutch electronics online company Coolblue is opening a store in Germany practically at the same time, see below.

///// NATIONAL TRADE
Will Douglas Buy An Online Pharmacy?
Lebensmittelzeitung.net expressly speaks of speculation, Manager-Magazin.de formulates it as a fact: Cosmetics and perfumery chain Douglas is apparently planning to buy an online pharmacy, namely Disapo.de for (according to the information) a three-digit million euro amount. The aim is to offer prescription drugs and thus participate in a growth market – which would be an important message before an IPO, which has also been speculated about for months. Douglas had refused to comment to LZ, but expressed appreciation for the growth potential of the online drug market and already had non-prescription drugs in its range.

Dutch online company Coolblue opens store in Düsseldorf
While Media Markt Saturn is opening a huge store in the Netherlands (see above), the Dutch online electronics retailer Coolblue is coming to Germany, also with a brick and mortar store. The store in Düsseldorf is according to the company 2,600 square meters, the first in Germany and the largest of the 19 Coolblue stores. Here, too, “experience” plays a major role: „Our stationary shops are there for our customers. They often know which product they are looking for, but they want to experience it for themselves “, Coolblue boss Pieter Zwart is quoted as saying. He promises more than 1,000 products, eight product worlds and 20 product experts in a team of 40 two billion euros and started in Germany in 2020 (online).

ANWR will Schuhe.de to make a “love brand”
Schuhe.de looks different than the other day – as announced by the operator ANWR Media, behind it is a revision of the entire brand identity including logo and color scheme. “We have invested a lot of time in optimizing our structures and processes in recent years. Now is the time to concentrate more on our brand, “says Arlett Ruhtz, Head of Marketing, to Schuh.de „an authentic love brand “. According to the announcement, the platform offers around 100,000 shoes from 1,300 brands and works with 1,700 affiliated shops.

ZukunftHandel-Award: HDE and Google honor Utry.me and Modehaus Ebbers
The ZukunftHandel initiative was launched by HDE and Google in September 2020. She supports companies on their way to digital transformation. For the second time, the associated award was given to courageous dealers last week. The online trial supermarket Utry.me won in the innovation strategists category. Products are tested on Utry.me before they are launched and, if necessary, placed on the virtual shelf.
The Ebbers fashion house won in the omnichannel talent category because it developed an omnichannel prototype to manage its goods during the pandemic. It helps to locate the products in brick-and-mortar stores and to prepare them for online shipping as quickly as possible.

TRADE INTERNATIONALMacy’s relies on a new marketplace
As one of the leading department store chains in America, Macy’s now also wants to conquer the marketplace business for its omnichannel sales. As reported in the US media, Macy’s plans to use the new marketplace to significantly expand the company’s product range in existing categories and brands and to introduce a number of new categories. For this purpose, selected third-party providers are to be enabled to sell their products on macys.com and bloomingdales.com. Mirakl was selected as the platform IT partner.

Anti-Black Friday movement is picking up speed
Over 85 percent of independent retailers in the UK do not participate in the Black Friday shopping festival. Many are also joining the rapidly growing boycott initiative and will instead take their websites offline next Friday, plant trees and donate their profits to charity, reports the Guardian. According to the British Independent Retailers Association (Bira), the protest is part of a growing movement against large online shopping websites like Amazon. It has gained traction since the beginning of the pandemic and is now very popular with the population.

Amazon employees want to strike on Black Friday
In over 20 countries, Amazon employees want to go on strike next Black Friday and draw attention to their working conditions. The protests are led by the Make Amazon Pay initiative, a coalition of 70 unions and organizations such as Greenpeace, Oxfam and Amazon Workers International. Again Business-Insider reported, organizers anticipate strikes in every area of ​​the business, from factories, warehouses and data centers to corporate offices.

Why Amazonization is an opportunity for brick-and-mortar retail
The “Amazonization of trade”, ie the triumphant advance of the platforms, is advancing incessantly. In order for retail stores not to perish as a result, they have to polish up and become hybrid, according to a recent article on Etailment.de. True to the motto: „If you can’t defeat your enemy, team up with them. “

Half of German retailers are worried about their suppliers
82 percent of retailers who normally offer Black Friday promotions would like to offer fewer discounts in 2021. That was the result of a survey by the spend management specialist Cut among 618 retail supply chain managers in Germany, France, the UK and the US. In Germany (121 respondents), retailers worry about problems caused by long supply chains (42 percent), bottlenecks and delayed containers (37%), staff shortages (36%) and fluctuations in demand (31%). They expect sales losses of 5.3 percent in the Christmas business due to delivery problems. And: 46 percent of German retailers are worried about the survival of their suppliers.

Hotline and Instagram are king’s contact channels
Communication channel specialist Superchat examined the communication behavior of the 30 top-selling German online shops (according to the ETI list) and noted: 93 percent of online shops offer contact via social media, above all via Instagram (86 percent), followed by Facebook (82 percent) and Twitter (39 percent). The messenger service Whatsapp only plays a role in two of the 30 shops (seven percent), which Superchat finds surprising in view of the spread of the service. By the way, number 1 of the contact channels is the classic hotline, which 90 percent offer. On the websites, it takes an average of 1.27 clicks to reach customer service, which ranges from zero (Baur) to three clicks (Amazon).

Ignoring, investigating, blocking: this helps against smishing
Anyone who receives SMS messages with links from unknown senders would do well not to call up the links and block senders: Smartphone users can use so-called smishing attacks (SMS plus phishing) with simple means. Companies and company cell phones can also be targeted by cyber attacks that aim to access data. Four of the five tips IT security experts give against smishing attacks are so simple that online retailers can easily recommend them to their customers.
Amazon activates tool for multi-marketplace advertising campaigns
According to Tamebay.com, Amazon is now making it possible in Germany, France, Great Britain, Italy and Spain Create multi-marketplace campaigns. The tool transfers all campaign settings such as targeting, placements and ad groups to the respective target country. In addition, budgets and bids are converted into the currency of the target country. The system only accepts products that are available in the target country.

November 27th is “Buy nothing day”
As an alternative to the shopping discount days such as Black Friday, there is an initiative that was invented by the Canadian artist Ted Dave in Vancouver in 1992: The “Kauf-Nix-Tag” is directed against uninhibited consumption and aims to raise awareness of sustainability strengthen in shopping. In North America it falls on the last Friday in November (day after Thanksgiving), in Europe it is the last Saturday in November (27th). There should be no shopping at all for 24 hours. The “Kauf-Nix-Tag” is organized in over 60 countries.

EHI study: Sustainability of packaging is the most urgent optimization measure
The EHI Retail Institute in Cologne asked 72 online retailers from Germany, Austria and Switzerland about their requirements and trends in shipping and returns management and published the results in the study “Shipping and Returns Management in E-Commerce 2021”. The author’s conclusion Thomas Kempcke is sobering: “… for online retailers, ecological criteria such as sustainability in general or the reusability of returns do not yet play the role that one might expect against the background of the current discussions.” 24 percent of those questioned stated that the sustainability of the packaging is the most urgent optimization measure, 20 percent attach importance to an optimal size ratio, 27 percent to an optimal use of materials and 15 percent to avoiding filling material. Returns are quite good: at least a little more than half of those surveyed (53 percent) are able to sell at least two thirds of the returned items as A-goods.