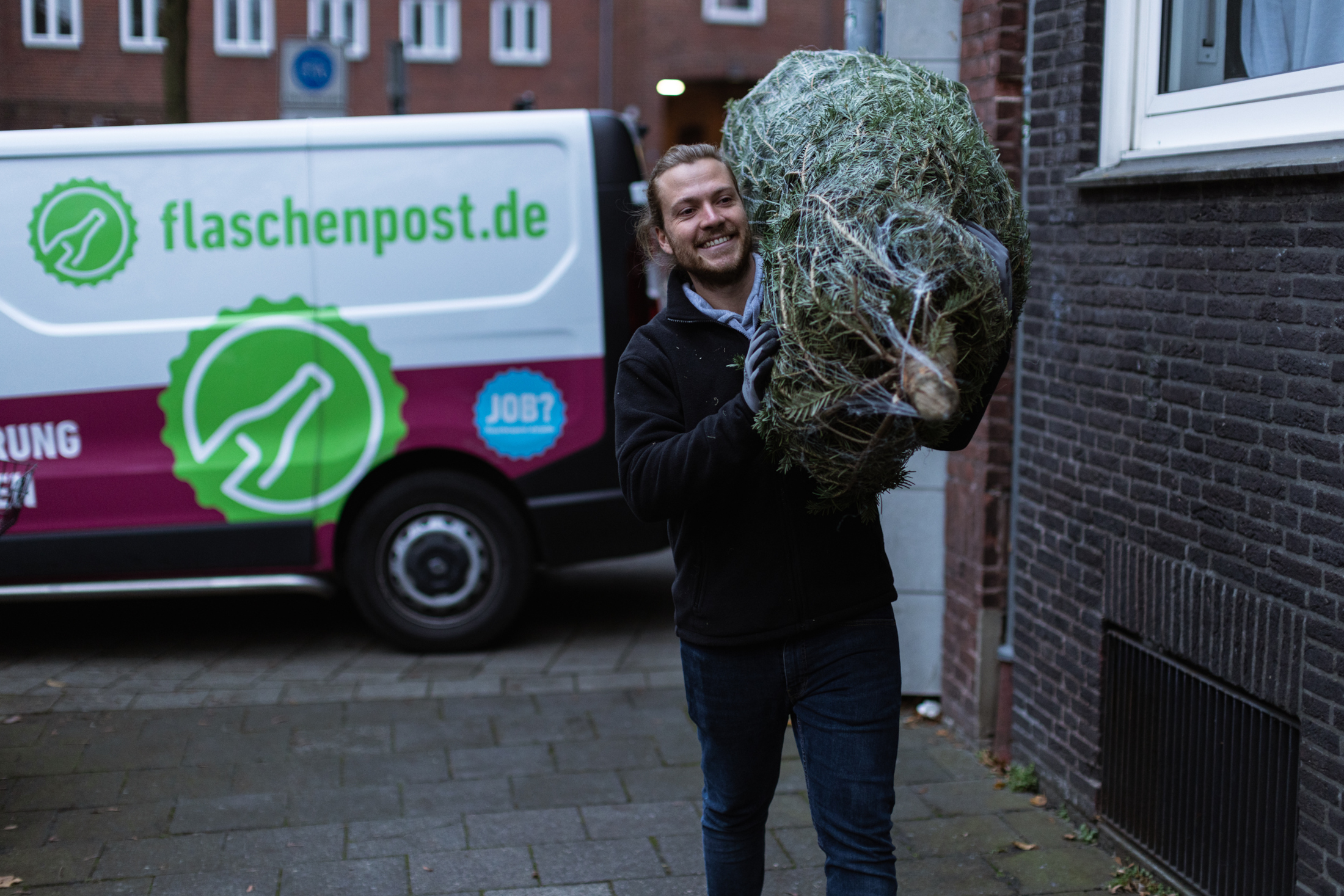 Nice for a long time delivers Christmas trees in a bottle in December. It seems to be worth it: also in 2021 announces the delivery serviceto put sustainably grown Nordmann firs in front of the door within two hours. By the way, Uber does the same thing, only in Los Angeles, San Diego, West Palm Beach (trees) and New York (containers) – and goes on as a message in a bottle: The “Uber Holiday Hub” operates as a year-round seasonal shop; next, Uber is announcing items for Valentine’s Day.

///// NATIONAL TRADE
Hellofresh wants to double annual investments
The cook box group Hellofresh expects adjusted Ebitda of 500 million to 580 million euros for the 2022 financial year, he announced on Wednesday yesterday – Analysts and investors were disappointed, so Handelsblatt.com. However, the company also wants to spend massive amounts of money: The annual investments in production capacities, infrastructure and product development would be doubled to around 450 to 550 million euros, according to Hellofresh, and 200 million euros alone should flow into automation. In order for this to work out, Valeri Liborski joins as Chief Technology Officer in January. He used to be at Microsoft and Amazon.

Small basic parcel delivery course
Also of interest to online retailers: Welt.de listswhat the legal situation for the delivery of online orders looks like in Germany. For example, deliverers are only allowed to drop off parcels if this has been explicitly agreed. And in the event of damage or a delivery that has not arrived, it is not the logistics company but the trading company that is the first point of contact.

Aldi is already delivering groceries in Vienna, Austria, and the test operation is now following in Zurich, Switzerland: together with the startup Annanow Aldi Suisse promises Same-day delivery under the motto “Ordered today, delivered today” (with the note: “if ordered by 11:30 am”). According to the website, the minimum order value is 50 francs, and “a large selection of our range in Aldi quality and, of course, at Aldi price” is offered. The delivery costs 4.90 to 9.90 francs plus 0.25 to 0.79 francs per carrier bag.

Galaxus celebrates the rise of diapers
The Swiss online retailer Galaxus broke a lance for diapers yesterday. Among the around 2,000 product types on offer, diapers are now number 9 in the sales hit parade. In 2014 they were seen in 731th place, in 2016 in 50th place and only in the top 20 since 2019.

The failure of the Amazon cloud also affected e-commerce
On Tuesday, parts of the Amazon Web Services cloud service in the United States were down for around seven hours. This happened According to Golem.de Although only in the US-East-1 region, it had far-reaching consequences for trading and ticket apps, Tinder, streaming services, online gaming – and business via Amazon.com. The website had just as difficulties as internal Amazon apps, and some US Amazon warehouses had temporarily stood still (Businessinsider.com shows videos of employees who pass the time singing and dancing). The reason was a network error.

France: Amazon should have lobbied against book shipping charges
In France, Amazon is said to have tried, through discussions with politicians, to prevent uniform minimum shipping charges for book orders across the country. This is reported by the Reuters news agency. Amazon has promised to raise its own shipping charges from one cent to 1.80 to two euros if the law does not come. But that is still around a third below the current rates of five to seven euros. Amazon did not comment on the reports.

Great Britain: Burberry also rents clothes
Lending clothes instead of selling: Marks & Spencer is already doing it in Great Britain (the “Morning Briefing” reported), Harrods too, now the luxury fashion brand Burberry is following. In cooperation with the My Warderobe HQ platform, 31 products are available to borrow, reports Textilwirtschaft.de. Sneakers, tracksuits, jackets, handbags, knitwear and trench coats can be rented from 22 pounds (26 euros) for one, four, seven, ten or 14 days.

Twice the money for Asian start-ups

Ebay introduces 3-D 360 degree view for sneakers
A few days ago, Ebay announced that it would take over Sneaker Con Digital, a service provider for authenticating sneakers (the Morning Briefing reported). Now comes the next facet in the collectibles business: In cooperation with the technology provider Unity promises Ebay a 3-D 360 degree view of the pieces for sale. A start will be made in December with individual sneaker sellers. Recordings with a mobile phone were sufficient, and software would use it to create a “true-to-life” presentation video.

Datev can automatically import Amazon payment information
Anyone who uses Datev software for bookkeeping can “import the relevant information from the payment data provided by Amazon quickly and easily into the bookkeeping”, the company promises. This works automatically for Europe-wide Amazon sales via a new interface. Companies and their tax advisors could use the numbers immediately.

Used things for the festival? Two polls say yes
Ebay has its department “Re-Store“, the platform MPB specializes in used photo and video equipment. Both asked around whether used items could be given away for Christmas – with (as expected) a similar result: the tendency was yes.

47 percent of Germans are skeptical about giving away used items because they fear quality deficiencies and a lack of acceptance among recipients – which, conversely, means that 53 percent were not skeptical. 57 percent also stated that they would be happy about a used gift in good condition. Survey by Opinium Research, around 2,000 Germans surveyed. /////

SUSTAINABILITY
FAZ calls out the “parcel shame” In an interview with the social psychologist Jonas Rees FAZ.net from the University of Bielefeld asks whether online shopping is okay or whether one should be ashamed of it, as it is for flights. The answer: All right is what the environment sets as the norm, and when everyone is shopping online, individuals feel no shame. Shame is generally positive because it has the power to change things. It becomes clear:

Online purchases are seen here as actions “at the expense of social sustainability”. Difficult terrain, especially since the effects of shopping traffic are not discussed.