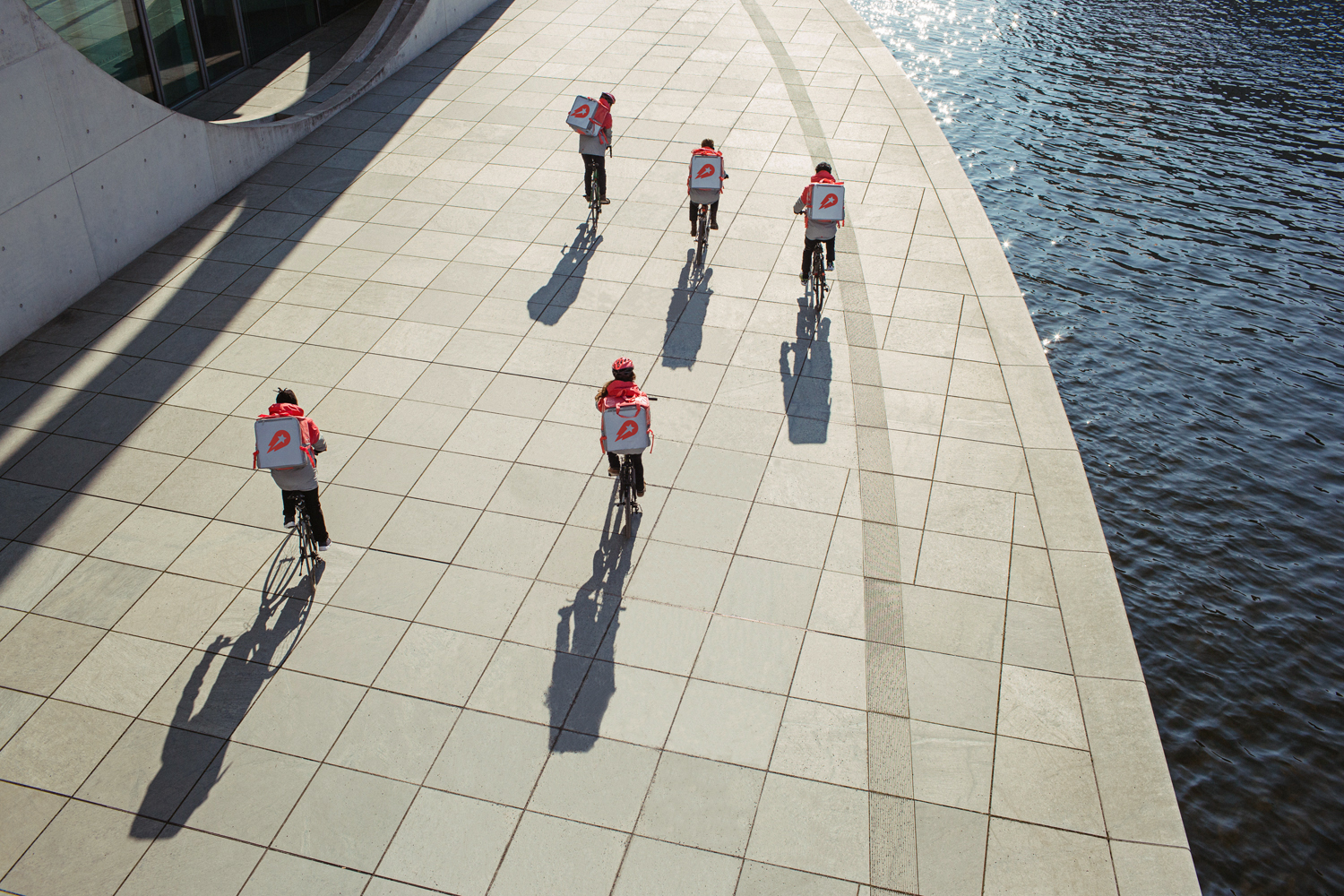 At the end of the year, apart from the corona situation, there is again good news. In its annual review, the Bundeskartellamt announced that the digital economy will be a top priority for the authority in the future. Good signals for online trading when the online giants are observed, slowed down and, if necessary, punished. Similar signals come from Brussels with the Digital Service Act and the Digital Markets Act. These are by no means empty words from the Federal Cartel Office, because it has used the abuse control, which has been adapted since the beginning of 2021, for proceedings against Amazon, Apple, Google and Meta. That shouldn’t let up.

///// NATIONAL TRADE
Delivery Hero ceases operations in Germany
Delivery Hero only started its Foodpanda delivery service in its home country Germany in May, now the interlude at the end of the year is over again. In the past eight months, the food was delivered to six German cities. Now, according to a report, the Food newspaper A development department is planned to be set up in Berlin. Delivery Hero boss Niklas Östberg does not rate the German market as lucrative enough. The end will also be in Japan, where the Foodpanda business will be sold. Delivery Hero intends to use the funds released as a result in other countries and businesses. For employees in Germany there should be opportunities in other areas of the company, but severance payments are also planned. The German market is hotly contested, in addition to Delivery Hero, Lieferando parent Just Eat Takeway has stepped up the pace in Germany, Doordash is two-pronged, once under its own name, then after the takeover of the Finnish provider Wolt, its launch in this country is imminent.

The Ifo Institute sees major delivery problems for retailers
The drought for retailers in terms of product deliveries has become even drier for retailers. According to a survey by the Ifo Institute 81.6 percent of the dealers complained about incomplete delivery of the ordered goods. This worsened the situation by 3.8 percentage points. This means that the retail sector is doubly affected by the current situation, because on the one hand there are delivery problems, on the other hand retailers have to struggle with consumers’ reluctance to buy, the economic researchers point out. The situation for trading in electrical appliances is particularly difficult, and the hardware stores also have problems. In the toy trade, things have gone up a little.

Amazon is lowering the limit on the inventory index
Amazon will be active in the New Year and make it easier for merchants to store goods on the marketplace. According to a report by the Amazon agency Revoic the group has lowered the limit for the inventory index for the first quarter of 2022 from 500 points to 400 points. If the corresponding number of points is not reached, the storage capacity of the respective company is reduced for the following quarter. Amazon raised the threshold to 500 points last May. The index is between 0 and 1,000 points, the decisive factors are excess inventory, sell-through, inventory with no active supply and inventory on hand. However, it only affects retailers who store their products on Amazon; providers who use their own shipping are not affected by the changes.

The online department store Bol.com, based in Belgium and the Netherlands, takes over the majority of the delivery service Cycloon. As part of a strategic partnership, the two partners wanted to push Cycloon’s growth further, with the delivery service being built more based on sustainable and social criteria, reports Tamebay. Bol.com wants to carry out a larger proportion of deliveries by bike and further increase the service level for customers. The previous shareholders remained, the acquisition should be completed in the first half of 2022.

Boxing Day remains number one for Ebay
In Great Britain, Ebay is waiting for Boxing Day, which is selling well this year as well. According to the online marketplace, December 27th was one of the best-selling in the British Isles in recent years. The British are looking for bargains shortly after Christmas, and the number of offers was more than two million in 2020, reports Tamebay. Ebay is reckoning with more than ten million this year for the week after December 25th, and many gifts that were unsuitable for various reasons ended up on the virtual shelves. At the top is women’s clothing, last year there were 1.4 million offers, followed by toys. On the demand side, video game consoles achieved the top positions.

McDrogerie.ch sees uninterrupted growth
The digital drugstore McDrogerie.ch draws a positive balance four years after it was founded. As a guarantee of success, the management cites that the corporate strategy is designed to be innovation and customer-focused, the conversion rate is six percent. Everything is set up with the help of automatisms, and artificial intelligence is also used, says the Swiss drugstore discounter. One of the most important factors in online trading is the delivery time, which is being worked on. In addition, there would be high-quality customer service in order to be able to achieve corresponding customer satisfaction. In the future, Switzerland is about a digital health market and McDrogerie.ch wants to use holistic approaches to turn the analog diagnosis and therapy processes upside down.

UPS is expanding its aircraft fleet
UPS’s cargo aircraft fleet continues to grow. The US parcel service provider has ordered 19 767F aircraft from Boeing. The delivery and commissioning of the new aircraft is planned for the period between 2023 and 2025, reports the Wirtschaftswoche. The investment volume is around 3.7 billion euros. 80 wide-body cargo aircraft of various types and 80 medium-haul aircraft have been ordered from Boeing this year.

Retail is increasing in digitization
Retail is closing its gaps in digitization and is catching up with other industries. This is the result of a representative survey of 951 German companies carried out by Bitkom Research on behalf of the IT service provider Tata Consultancy Services (TCS) has performed. In the evaluation using a ten-point scale, where the value 10 stands for complete digitization, retail now reaches 6.5, compared to 5.5 the previous year. This puts the industry above the average of all economic sectors, which come to 5.9. The market researchers see the establishment of a special digitization unit, which 45 percent of the companies now had, as one of the main factors. Change management methods are used less frequently (52 percent), but a consistent approach is required here in order to remain competitive, according to TCS. The use of platforms, which 57 percent use, is also important for economic success.

The end of the website analysis service Alexa
In May 2022 Amazon the website analysis service Alexa. It can be used to collect and evaluate data on page views, and it is also possible to research keywords. The export of the data is possible in various ways, after May 1st the customers would then no longer have access, according to von Company page. New applications would no longer be accepted, but customers would have unrestricted access by the deadline. You could also close your account. Alexa was founded in 1996 and has been part of the Amazon group of companies since 1999.

Digitized and curated: Orderchamp wants to make wholesaling better
The Dutch start-up Orderchamp wants to help retailers stand out from the competition. The wholesale platform should be more than a “digital shopping machine”: the range is selected strictly according to environmental criteria and social standards, the dealers should form a community and support each other. Orderchamp’s head of Germany, Maximilian Gassner, explains how this works in an etailment interview.

Sustainability is perceived more and more in all population groups and the number of people who deal with it is growing. So, according to an analysis, the GfK also expected for 2022 that it will remain the hot topic. Environmental pollution worries 74 percent of Germans, 69 percent fear climate change. For 68 percent, it is important that companies behave in an environmentally conscious manner. The market researchers advise, however, to adapt the communication of the topics of values ​​and social responsibility to the respective target group. With regard to the product groups, there are growth opportunities in large household appliances, among other things, due to questions about sustainability. These would be in the areas of energy efficiency.