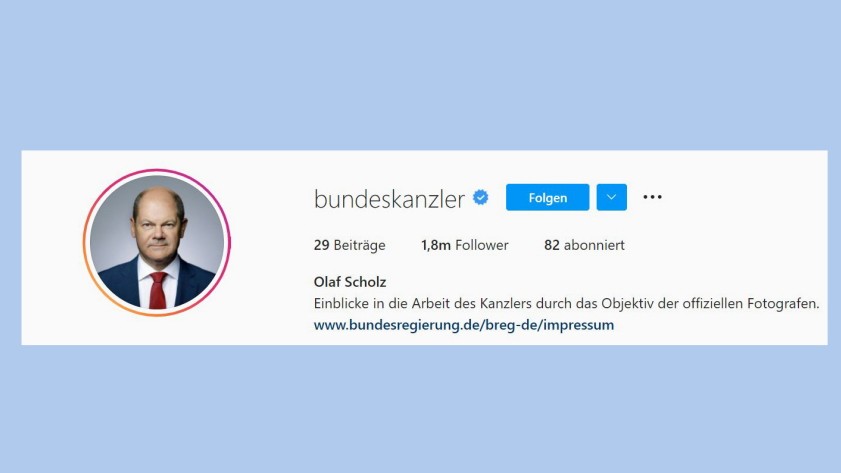 Does Scholz have a right to Merkel’s followers?

“Olaf Scholz elected Chancellor of the Federal Republic of Germany.” This is the first post on the Instagram channel on December 8th @Chancellor. 1.8 million people are already following – just a few minutes after the company was founded.

Where do they come from so quickly? The same day, another Instagram channel: The last post from @Bundeskanzlerin, which is also followed by 1.8 million people, shows the outgoing head of government with a bouquet of flowers in her hands next to her successor Scholz. Shortly thereafter, the channel will be in @ChancellorMerkel renamed, “archive account” is now in the bio, the followers are transferred to @Bundeskanzler – they now automatically follow both channels. So this is what a digital handover looks like: Without the users agreeing, Merkel followers suddenly become Scholz followers.

How arbitrarily social media decide on this issue becomes clear when you look at how the handover went on December 8th on Twitter. Angela Merkel’s government spokesman Steffen Seibert, who is under @Regsprecher has reached around one million followers, thanks “everyone who followed me here”, his account will now be called @RegsprecherStS archived. Please follow his successor Steffen Hebestreit at @Regsprecher – a new account that starts with exactly zero followers.

Was it Merkel followers or federal government followers?

Meta, the group behind Facebook and Instagram, sees the reach of official channels as a legacy that is passed on with the office. On Twitter, however, every new government has to rebuild its reach. This manifests itself in two different concepts of who speaks through the channels of state representatives: the office itself – or the person who holds it.

Lawyers are more on the side of Meta than Twitter on this issue – the common assessment is that the person behind the office is disappearing. This is relevant, for example, when it comes to whether representatives of the executive branch on social media are allowed to block people at will, unless they clearly only use their account privately. The scientific service of the Bundestag writes to the fact that this would mean a violation of several fundamental rights at the same time. It would also be inadmissible if an authority representative were to issue bans on an official building at will.

The lawyer Christian Solmecke, who specializes in Internet law, suspects that this could possibly even lead to a “right to followers”, i.e. a right to take over subscribers from the previous government that can be enforced against Twitter – provided that they were not Merkel followers but federal government followers . For this purpose, it should be clarified, for example, which e-mail address was given when registering. Dennis Amour, lawyer and managing director of the Bavarian Association of Journalists, has little doubt on this issue. “Strictly speaking, the users did not follow Angela Merkel, but the information and press office of the federal government,” he says.

Has Joe Biden’s team checked these legal options? Twitter has the number of followers on the official government channel @POTUS (short for: “President of the United States”) at the handover of Donald Trump namely also reset to zero. As if the president were only the top political influencer in his official function, who should kindly work out his position first. Trump had inherited Barack Obama’s Twitter followers – but then preferred to use his formerly private account @realdonaldtrump as the official mouthpiece (or should we say: official megafon). Twitter implicitly followed this logic, not an office but a person speaking here. But not Meta – the company, which is known for not wanting to mess with any government, no matter how nasty, accepts the principle of reach and state followers linked to government offices.

These questions have never arisen in Germany. The reason for this is simple: Before the Merkel era, there was no Twitter or Instagram. An “online directory that connects people via social networks at universities”, which was hardly known at the time, called “The Facebook”, only dropped the prefix “The” two days before Gerhard Schröder took office.