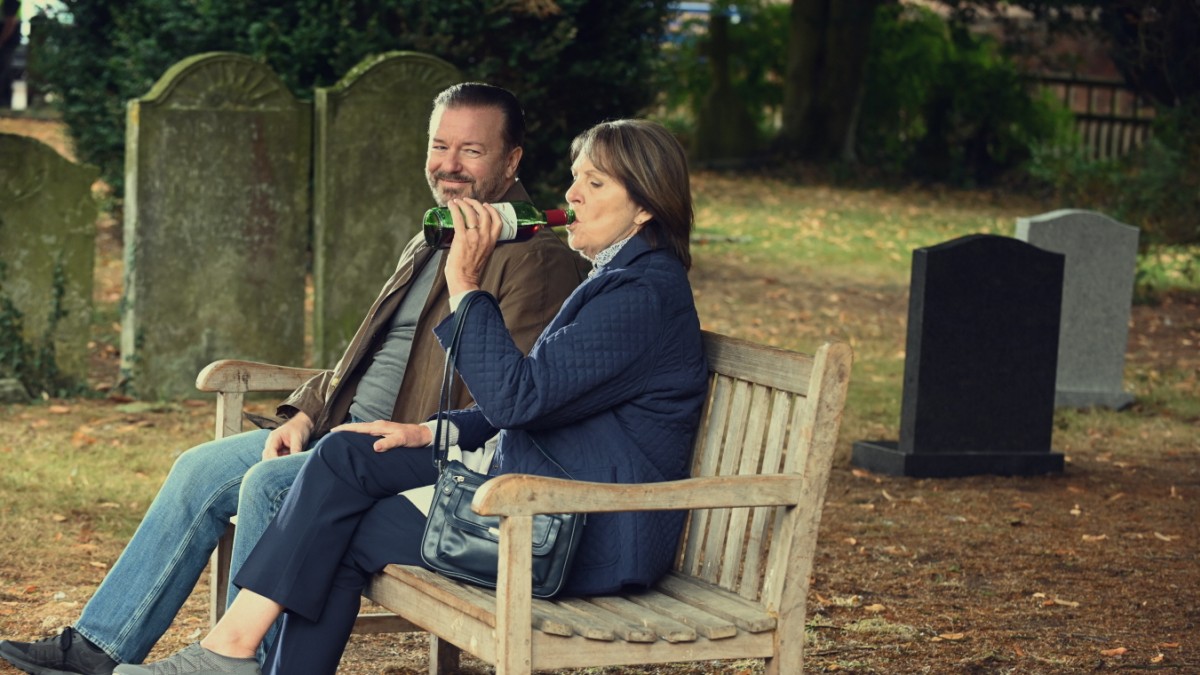 “After Life” on Netflix: A man like a cactus

You have to like him, this Ricky Gervais. With his cynical, cranky grin and this never-ending anger inside. He’s a master at making misanthropy charming and ruthless funny. Because deep down, he’s a good guy.

The third and final season of plays with these apparent opposites After Life. The Netflix series – written, directed and starred by Gervais – tells the story of Tony. He is a local journalist in a small English town and believes he has lost his purpose in life after the death of his beloved wife Lisa. More than once it is his shepherd dog that keeps him from committing suicide. Somebody has to feed them.

After Life tells about the loss. There are few series that merge so much with the perception of their protagonist. Viewers see little more than what Tony sees. His verbal antics, when he teases a colleague for believing in astrology, when he repeatedly calls an obese colleague “disgusting”, when he rudely insults a man who is talking a little too loudly to his toddler at the next table. And we see the moments when Tony suddenly goes soft. When he watches the old videos on the sofa in which he and Lisa play pranks on each other in a way that is otherwise only known from teenagers in love. Or when he philosophizes with a woman on the cemetery bench in front of her grave about the meaning of life.

Other people hardly have a place next to this despair. That is the core of the story, but also a bit of a shame for the dramaturge. Because all the bizarre secondary characters who walk through Tony’s small English town would have what it takes to carry their own series. Tony’s brother-in-law Matt, Lisa’s older brother, who, as editor-in-chief of the small local newspaper, is constantly trying to please everyone. He’s trying to save his troubled marriage and make Tony’s life worth living again. Or the quirky postman whose romance with a prostitute is so wonderfully quirky. And Emma, ​​the nurse who takes care of Tony’s father and with whom he gets very close to something like love.

The supporting characters remain a backdrop to Tony’s grief

But in the end Tony doesn’t really let any of them get close to him. He cannot allow a relationship with Emma because he is still too attached to Lisa. The only moment Tony says life might be worth living after all is when he scares his brother-in-law, who is standing on a ladder, so much that he lands buried under boxes on the editorial floor. He sees everyone he interviews for his articles through the lens of his own pain. The two young sisters, one suffering from cancer and the other having her hair shaved off with her. The old couple who only find each other again after decades. Tony only sees himself and Lisa in them. They all remain a backdrop that illustrates Tony’s grief.

And so this season, like its predecessors, jumps between extremes: from almost inhumane evil humor, behind which a painful sadness seems to lie, to moments of kitsch. These moments in which Tony, who a few days earlier threw a cactus through the window of a moving car, is praised as an “angel” in the sky. Brief moments from: Everything will be fine. After three seasons of erratic back and forth, that’s hard to believe. Because neither Tony nor the series find a healthy middle. And so, in the end, one feels pity above all. For Tony, but also for all the people who are his extras every day.