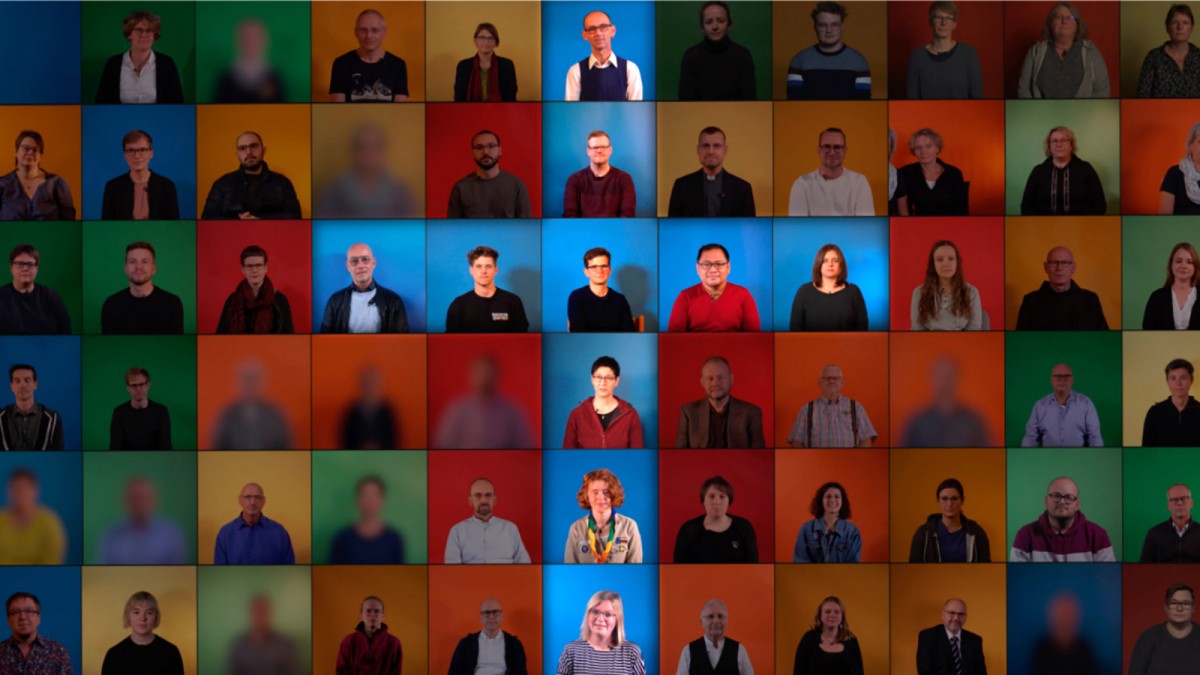 The fact that ARD prefers a documentary in the program at very short notice, not only from one place almost at the witching hour to prime time at 8:30 p.m., but also by a full two days from Wednesday to Monday, allows two different conclusions. Either someone here really has an urgent concern, or you have sensed the hour.

In the case of the documentary How God Created Us, both are probably true. Because for days the Catholic Church has been in discussion again, as always, not for its formidable sermons, but because of the knowledge or ignorance of, among other things, the former Pope Benedict XVI. to various cases of abuse. Because of their failures. The time for another church stirrup is therefore favorable from a program planning point of view, just as the need of the protagonists is honestly urgent.

Because in “How God Created Us”, 125 people came out as gay, lesbian, queer, trans or non-binary under the keyword #OutInChurch. They are all employed in church service in the narrower or broader sense, as pastoral advisors, organists, educators, voluntary youth workers, priests, nurses. Most show their real name, occupation and place of residence. They all violate applicable Catholic canon law qua sexuality. Many of them could now lose their jobs. But they want to fight “for a church without fear”.

Again and again it’s about loneliness, about the pain of not being accepted

The documentary by Hajo Seppelt, Katharina Kühn, Marc Rosenthal and Peter Wozny tells the story of a gay pastor, a trans person who studies and wants to teach religion, a lesbian couple in church service who only come out when both are retired . Faces and individual statements by other Catholics are intercut. “If you knew how much I worried and prayed that this wasn’t the case,” says a young woman, “I didn’t choose it.” Others are silent, have tears in their eyes, some sit in front of the camera with their partner. Again and again it is about loneliness, about the pain of not being accepted by a church with which they feel connected. Seeing these exhausted faces, knowing that these people may actually be risking their jobs, is as oppressive as it is impressive.

Homosexuality is not only not allowed in the Catholic Church, it is forbidden. It is said that the research took ten years, so painful, traumatic and simply threatening the existence of several protagonists. People like Carla Bieling. As the documentary tells, she worked for 13 years in the diocese of Paderborn as a dean’s officer for youth and family. Two weeks before the start of her maternity leave, she was fired, she had disclosed her registered civil partnership to her employer, and the church saw it as a “breach of loyalty”.

The pressing question you have while watching: Why are you doing this to yourself?

Absurd, but what happened to Carla Bieling is legal. Although nobody in Germany may be discriminated against because of their sexuality, the churches have their own labor law. Anyone who signs a contract there also agrees to the teachings of the church. Corresponding Bible passages are briefly displayed in the documentary, but not dealt with in detail. Why this dogma exists in the Church at all is not explained. But knowing the circumstances under which Bible stories came about wouldn’t have hurt the film. It would help to assess how they are dealt with today and whether they really should be made the basis of employment contracts. But that this dogma exists, as discriminatory as it may be, is something everyone who gets a job at the church knows.

All the more urgent is the question you have when watching: Why are you doing this to yourself? Why don’t you quit? If you don’t accept me, I won’t accept you. “How God created us” practically does not ask this question. For the Catholics portrayed, it’s not about leaving – or not. The documentary assumes a kind of non-negotiable agreement, namely that no one vacates the field here. And that it is the church that needs to change.

Here, too, it would be interesting to hear what arguments people can still find in themselves for the church, because there must be enough not to flee. But that would probably have made things more complicated, perhaps too complicated for the format.

“How God created us” clearly sides with the protagonists, almost tipping over into activism. As much as that is humanly understandable, a little more objectivity would have done the complex topic good. Credit must be given to the creators for attempting to interview church officials; the heads of all 27 dioceses were asked. But only one bishop, the Aachen bishop Helmut Ders, speaks in front of the camera. He speaks of a “need for action” and of legitimate demands for labor law reform. He even admits that he once saw “some diminution” in homosexuality, but has continued to develop it. But what exactly will or should happen now remains open.

Parallel to #OutinChurch, a petition of the same name was started by those who came out. It says: “We demand a change in the discriminatory church labor law, including all derogatory and exclusionary formulations in the basic order of church service.” At this point it is clear that this is indeed church activism, now recognizable as such and therefore as legitimate as it needs to be.

Federal Minister of Justice Marco Buschmann intervened on Monday: With all due respect to the church’s right to self-determination, as one of the largest employers in the country, the church must take into account the principle that nobody should be disadvantaged because of their sexual identity, he writes. 125 outings – that’s far too many to prosecute each individual canonically without the public now learning about it. “The individual is protected when there are many,” says the documentary. Now it is up to the church how to deal with these many.