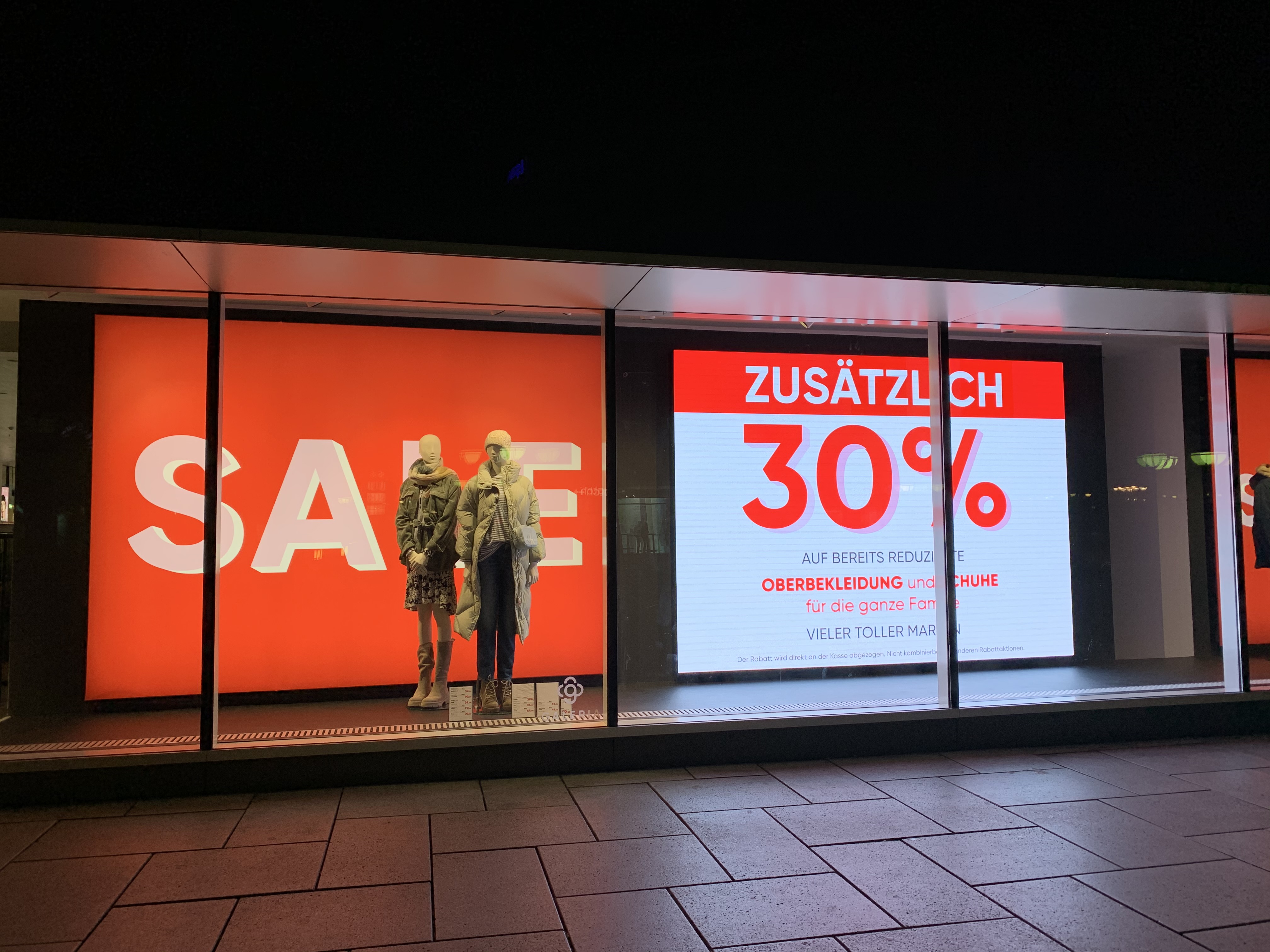 The winter sales, which still exist even after the official abolition in 2004, begin on Monday. And it will be a narrow WSV, expects the trade association Germany: The current remaining stocks are currently rather low in many fashion and shoe shops, because the trade bought cautiously and did not get everything because of the supply chain problems. Quite apart from the fact that WSV and SSV seem a bit out of date in times of Black Friday and Singles Day.

///// NATIONAL TRADE
BEVH I: E-commerce with goods grew by 16 percent in 2021
The Federal Association of E-Commerce and Mail Order Germany (BEVH) announced yesterday bright picture of the industry painted: E-commerce in Germany turned over around 99 billion euros net with goods in 2021, 19 percent more than in 2020. That corresponds to a seventh of household expenditure. Conclusion: “E-commerce has become the new normal for customers and retailers.” The association highlights five trends: 1) Marketplaces grew almost 20 percent, i.e. faster than the market; for the first time, more than half of sales (51 percent) flowed through them. 2) 40 percent of sales came from mobile devices, up 42 percent. 3) The strongest group of online buyers are people aged 50 and over (49.8 percent). 4) The average receipt rose by almost 20 percent to 144 euros. 5) Order frequency also increased: 41 percent ordered online “in the past seven days” (2019: 33 percent). Basis: Survey of 40,000 Germans throughout 2021.

BEVH II: Clear wishes for politicians
As part of its annual press conference yesterday, the association also addressed wishes to politicians. So could the planned Vertical Block Exemption Regulation bring different prices online and offline – that contradicts the principle of seamless shopping. in the Digital Markets Act the BEVH sees gaps that need to be repaired, for example between the duties of anonymization and the verification of majority. And the Digital Services Act throw marketplaces in a pot with search engines and social media: “But a distinction must be made between simply visiting sites and actual contracts.”

DM starts delivery of cargo bikes in Berlin, Munich and Vienna
The drugstore chain DM is expanding its “express delivery” from Karlsruhe to Berlin (Friedrichshain, Prenzlauer Berg, Mitte), Munich (extended city center) and Vienna. It’s probably not final DM speaks of an “expansion of the test”. It is “important for the development and expansion of the integration of online and stationary shopping at DM”. The order runs via DM.de or your own app, the “express delivery” per Lastenrad costs three to 7.95 euros. The prerequisite is that the desired goods are available in the connected branches. The whole is one Cooperation with Pickshare.

Brand Finance praises Edeka, Lidl, Delivery Hero and Zalando
The “Global 500” report by the management consultancy Brand Finance claims that annually to determine the 500 most valuable brands in the world. Mercedes-Benz is the most valuable German brand in 2022, followed by Deutsche Telekom, but retail in particular is doing well: Edeka and Lidl recorded the largest growth in brand value of all German brands, Delivery Hero and Zalando have grown the most since 2020, namely by 303 and 115 percent. “The internationally active German retailers showed a high level of resilience, competitiveness and market dynamics,” says Brand Finance. “This also pays off in the development of the brands.”

Start-up Ink Links: Increase customer loyalty with ink and fountain pens
Handwritten messages are read by more customers than printed ones, says Ink Links founder Maximilian Krist. The start-up automatically produces handwritten package inserts with fountain pens and ink. With them, mail order companies can send customers personal and appreciative messages – and thus build a bridge from the online to the offline world. In the detailing interview, the founder explains the business model.

TRADE INTERNATIONALGetir plans to invest £100m in the UK

To Data from Sky.com the Turkish fast delivery service Getir wants to invest 100 million pounds in Great Britain. Among other things, 6,000 drivers, order pickers and employees for dark stores are to be hired by the end of the year – so far Getir employs 4,000 people on the island. According to the report, the supplier has been on the road in Great Britain for about a year and delivers in around 20 cities. At the end of November, Getir acquired British competitor Weezy (the Morning Briefing reported).

Spain: Paferdienst Paack receives 200 million Euro
The Spanish e-commerce logistician Paack, which operates out of Dubai, receives €200 million in capital from a Series D round. As Tech.eu writes, the money is earmarked for the introduction of new technology, expansion throughout continental Europe and a sustainability strategy. Paack is already working in Spain, Portugal, France and Great Britain.

All against Amazon – in one sentence each

Fashion Cloud Proposes E-Commerce Data Standard
Fashion Cloud, operator of a B-to-B platform for fashion manufacturers and retailers, proposes a data standard, which suppliers use to provide the e-commerce product data that retailers need. Because: “The data quality of the suppliers varies greatly and is in need of optimization in many cases.” The standard consists of mandatory and optional attributes to describe the goods. It was developed with the support of BTE and EK/Euretco. According to their own statements, 17,000 retailers download product data via Fashion Cloud.

Merge Remira and Roqqio
Last year, Remira from Dortmund, software house for supply chains, took over, among others, Kyklos from Italy and Outperform from South Africa (the “Morning Briefing” reported), now reports the company the merger with Roqqio, a provider of omnichannel software. The products and solutions are also merged, namely “Supply Chain Solutions” and “Omnichannel Commerce” to “Unified Commerce”. Together they count 8,000 customers, around 500 employees and a cumulative annual turnover of 50 million euros.

Online shops must offer salutations for the third gender
Online shops that only offer the salutations “Ms.” and “Mr.” violate the General Equal Treatment Act and can violate non-binary people in their general personality rights. The Higher Regional Court of Karlsruhe made the final decision (December 14, 2021, file number 24 U 19/21) – but restricts: “However, there is no right to compensation for immaterial damage asserted because the discrimination found in the specific case did not reach the required intensity.”

Reader Favorite: Art and Stock Gains in the Metaverse
Not nuggets, but NFTs are the currency of the new virtual world. The latest craze comes from Adidas and Prada: 3,000 users and their photos become part of such a digital object, known as a “non-fungible token”. Anyone who registers on the waiting list by 2:00 p.m. today, Tuesday, January 25, has at least a small chance of participating. Guest author Bernhard Haas, Managing Director of the Bitfuel agency, explains why Adidas and Prada are pushing ahead and what retailers and manufacturers need to know about the new form of the customer journey.